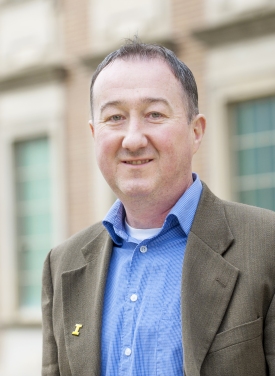 Our research is in the field of supramolecular chemistry - an area that bridges chemistry, physics, and biology through exploiting noncovalent bonds - as related to organic solids. Our efforts involve the crystal engineering of:

The ability to make covalent bonds in the organic solid state impacts fields ranging from organic synthesis (e.g. new molecules) to green chemistry (e.g. solvent-free synthesis) to materials science (e.g. information storage). We use template molecules (e.g. resorcinol) to direct the formation of covalent bonds in solids. Both hydrogen-bond and coordination-driven self-assembly are used to position olefins in multi-component assemblies in solids for [2+2] photodimerizations.

The bulk properties of an active pharmaceutical ingredient (API) (i.e. drug molecule) can be altered using molecules that cocrystallize with an API to give a new solid form. We have described cocrystals involving caffeine and carboxylic acids based on competing hydrogen-bonded heteromolecular synthons. We have also described the first pharmaceutical nanococrystals and a unique role of tautomers in cocrystal design and formation. We are collaborating with Dr. Geoff Zhang of Abbvie (Chicago, IL) to develop targeted pharmaceutical cocrystal materials.