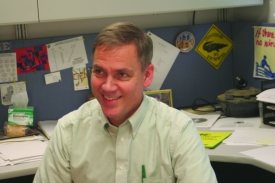 Kampanols A - C (1998) and Phomoarcherins A – C (2011) are sesquiterpenes having the same tetracyclic core, differing only in functional groups around the A & D rings. Kampanols are inhibitors of the enzyme FTase whereas phomoarcherins have shown cytotoxicity against cholangiocarcinoma and KB cell lines. Phomoarcherin B also has antimalarial activity against Plasmodium falciparum.
Our interest in these compounds stems not only from their biological activities but also from the fact that these molecule could be assembled using the highly efficient Lewis acid mediated tandem cationic cyclization – electrophilic aromatic substitution developed by our group and successfully employed in preparation of the natural schweinfurthins. My research is focused on completing the non-racemic total syntheses of these compounds. Currently, I am in the process of synthesizing epoxide 1.

Recent work on the inhibition of the enzyme geranylgeranyl transferase type II (GGTase II) through the use of bisphosphonates and 3-PEHPC analogues has provided a number of potent inhibitors. However, many of the bisphosphonate triazoles target geranylgeranyl diphosphate synthase (GGDPS), which leads to cells depleted of GGPP and affects proteins modified by both GGTase I and GGTase II. In an effort to develop specific inhibitors of GGTase II, my research has concentrated on modifications of isoprenoid triazoles bearing a carboxyphosphonate. Several isoprenoid triazoles, including the carboxyphosphonates 1 and 2, have been synthesize via click chemistry and now are being tested for activity.

It has been shown that phosphoantigens play a vital role in eliciting the Vγ9Vγ2 T cell immune response and this has led to research into structure activity relationships of small molecule phosphoantigens such as HMBPP. The pivaloyloxymethyl prodrug of an isoprenoid phosphonate (1), generated in our group, has been found to be the most potent phosphoantigen described to date. My project centers on making derivatives of this prodrug to determine if an increase in potency can be achieved through slight modifications in the electronic and steric properties. It has been shown that α-fluoro phosphonates behave more like their phosphate analogs in situ, which has led to the goal of producing analog 2. The allylic alcohol moiety of 1 is necessary for activity, but cyclopropyl groups are sometimes used in medicinal chemistry as olefin mimics which has led to the goal of producing the new analog 3.

My research plan is to synthesize prototypical GGTase II inhibitors based on the benzimidazole core with representative isoprenoid and pyrophosphate mimics. These inhibitors are intended to inhibit Rab protein prenylation, leading to the disruption of monoclonal protein trafficking and other key cellular processes in multiple myeloma cells.

My research focuses on the synthesis of a new class of bisphosphonate ketals, such as compound 1 shown below. These compounds are similar to those previously prepared in the Wiemer group. Past compounds have been efficient inhibitors of geranylgeranyl diphosphate synthase (or GGDPS), and we believe these compounds may be as well. The major difference between the two classes is the oxidation state of the central carbon: whereas previously this oxidation state was similar to that of an ester or carboxylic acid, my research focuses on the synthesis of compounds in the carbonate oxidation state.

My research has been directed to the synthesis of asymmetric bisphosphonates that incorporate isoprenoid character by virtue of the stereogenic alpha carbon as well as through the phosphonate ester (4a-e). These compounds have shown promising activity in the inhibition of geranylgeranyl diphosphate synthase, and the family can be modified in several foreseeable ways hopefully to provide more potent analogues. The highly negative charge of the active bisphosphonate salt has been masked as a POM prodrug in this family which can provide a precursor that may traverse the cell membrane more readily before being enzymatically cleaved. With the maximization of biological activity we hope to provide compounds with prospective therapeutic utility in the treatment of certain diseases such as multiple myeloma.

My current research is focused on the synthesis of analogues of the natural schweinfuthins. Previous research in the Wiemer group has shown that the conjugated p system between the right and left halves increases biological activity. This has lead us to consider combining the left and right halves of the system to form compounds 1 (an ester), 2 (an amide), and 3 (an amine).

Recent studies of phosphoantigens prodrugs demonstrate that they are very potent agonists of the butyrophilin isoform 3A1 (BTN3A1). Binding of these small molecule phosphoantigens to BTN3A1 leads to activation of the Vγ9Vδ T cell receptor through unknown mechanisms. BTN3A1 is a potential novel target for new therapies for infectious diseases and various cancers. Currently, the mechanism of how cells take up these compounds is not well understood. My interest lies in the synthesis of fluorescent protecting groups to be used for further mechanistic studies of BTN3A1 activation and the resulting effects on T cells.

The pivaloyloxymethyl (POM) prodrug of an isoprenoid phosphonate has been shown to be a potent phosphoantigen. Despite its potency it quickly breaks down in serum. With other drugs, it has been shown that phenyl phosphoramidates provide increased stability. My research focuses on synthesizing the phenyl phosphoramidate 1 and phosphordiamidate 2 prodrugs of this isoprenoid phosphonate.

Current undergraduates and their research: