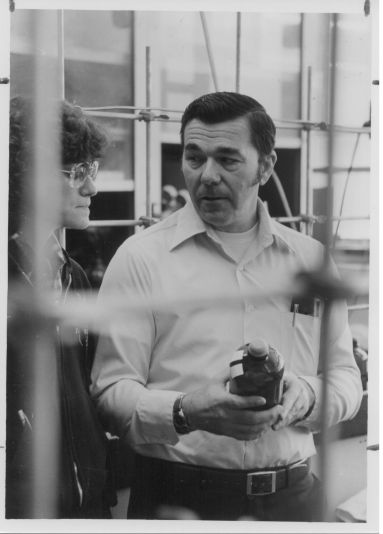 Born July 16, 1934 in Baltimore, Maryland, Professor Burton was a major figure in the international fluorine community, and served on the faculty at the University of Iowa Department of Chemistry for 45 years. After studying organic fluorine chemistry with Dr. W.T. Miller at Cornell University and receiving his PhD in 1961, he spent a postdoctoral year with Nobel Laureate Dr. H.C. Brown at Purdue University, then came to the UI Department of Chemistry as an Assistant Professor. His research interests lay mainly in synthetic and mechanistic organic chemistry, particularly in the development of new reagents for introduction of fluorine into organic compounds. He became particularly well known for development of trifluoromethylcopper reagents and other organometallic species that accomplish site-specific introduction of fluorine. Dr. Burton rose steadily through the ranks to Professor, teaching thousands of undergraduates and graduating over 65 PhD students. In 1989 Dr. Burton was appointed the Roy Carver/Ralph Shriner Professor of Chemistry, a chair he would hold until his retirement in 2007.

Retirement, however, was not the end of Dr. Burton's research career. Though he made time for golf with old friends, he kept up a vigorous publishing schedule until 2015, when he and Burton Group alumna Sandra Lukaszewski-Rose published "Synthesis and functionalization of (Z)-1,2-difluoro-1-tri-n-butylstannyl-1,4-pentadiene" in the Journal of Fluorine Chemistry; in 2014, Dr. Burton and colleagues, with the assistance of PhD student Michael Sinnwell of the MacGillivray group, published "Synthesis of new fluorinated synthons: (E and Z) ClFC==CFl and (E and Z) BrFC==CFl" in the same journal. These last papers capped a remarkably prolific research career, in which Dr. Burton published over 350 papers and reviews, contributing book chapters that paused to take stock of the roads fluorine research had taken, and serving in ACS leadership roles.

Generations of undergraduate students knew Dr. Burton as a demanding teacher of organic chemistry, but he was patient and encouraging with the many students who crowded into his narrow office and stood around the board, cogitating over the clues he doled out. Former group members praised his mentorship, humor, and generosity, and recalled the vital support his wife of nearly 59 years, Marge, provided to the entire group. Dr. Burton thanked Mrs. Burton in his writings, too, expressing gratitude for her patience with his "mistress", chemistry.

There was no shortage of awards or recognitions. He was named a Fellow of the Japan Society for the Promotion of Sciences in 1979. He also received NSF's Special Creativity Award, the NATO Travel Fellowship Award, the ACS Fluorine Division Award for Creative Work in Fluorine Chemistry, and the Governor’s Science Medal for Scientific Achievement.

Dr. Burton was also very active in the American Chemical Society Fluorine Division, serving at least three terms as an Executive Committee member . He was awarded the ACS Division of Fluorine Chemistry Distinguished Service Award in 2003 in recognition of his efforts.

In 2007, the Burtons' five children, Andy, Jenny, David, Julie, and Betsy, generously established the Donald J. and Margaret A. Burton Scholarship for outstanding undergraduate chemistry majors at the University of Iowa. Nine undergraduates so far, three women and six men, have been chosen as Burton Scholars, and have received a total of $17,000 in scholarships. The family requests that those who recall Dr. Burton fondly and would like to remember him with a tribute do so in the form of a donation to the Burton Scholarship fund.