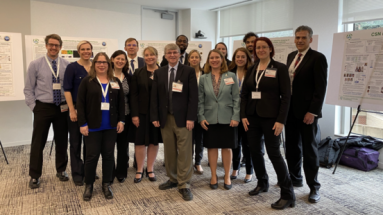 With a $20 million grant renewal, the Mason group is celebrating the success of the NSF Center for Sustainable Nanotechnology (CSN), a multi-institution project that began at the University of Wisconsin-Madison in 2012 and now partners with eleven other laboratories and universities across the country, including the University of Iowa. The Mason group, which uses theory and computational models to understand how technologically important nanomaterials change when they're released into the environment, has been part of the project since 2015. Mason's CSN projects have supported several UI Chemistry graduate students and postdocs, whose results have been published in journals such as Environmental Science: Nano, JACS, and Nature Nanotechnology.

The group's next five year's work with CSN probes the physical basis of an agriculturally promising discovery: copper oxide and copper phosphate nanoparticles have cured fungal infection in soybeans. Some copper compounds performed better than others, and the reasons may lie in the varying coordination environment of the copper as the compounds dissolve in the soil's complex aqueous environment. Using electronic structure theory and thermodynamics modeling, the Mason group will explore how the fungicidal compounds dissolve in simulated complex aqueous environments: ones that include growth media for bacteria, for instance, or are already rich in ions.

Chemistry graduate students Diamond T. Jones and Blake G. Hudson are current CSN participants and will continue with their work. Additional positions supported by this renewal are now available.

You can learn more about the Mason group and its CSN projects in this Iowa Now story and in this brief introductory video.