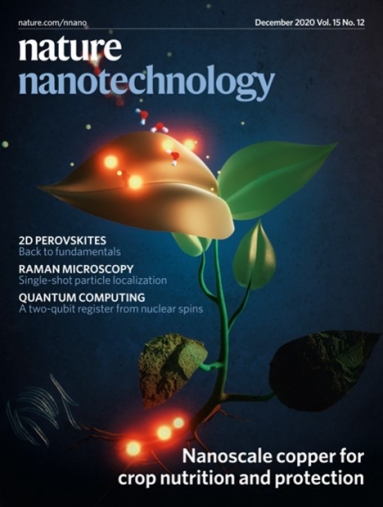 Blake Hudson, 3rd-year graduate student in  Prof. Sara E. Mason’s research group, said it was a nice surprise to hear that his work on modeling metal dissolution had caught the attention of plant nutrition researchers, but having his project with them featured on the cover of December 2020's Nature Nanotechnology was even nicer. Hudson is a researcher in the NSF Center for Sustainable Nanotechnology, and his modeling is usually applied in the area of battery development, where stray metal ions are undesirable. In this case, though, well-timed metal dissolution is just what's needed. Mason's colleagues at the Connecticut Agricultural Experimental Station (CAES) and University of Wisconsin-Madison were building on research that showed copper treatments to be promising in reversing soybean sudden death syndrome, a root-rot fungal disease responsible for $3 billion in crop losses annually in the United States alone. In such treatments, copper nanomaterials are sprayed on plant leaves, and the copper ions they release migrate to the roots, where they help the plant fight the disease nutritionally. The question was whether nanomaterials might be tuned to make copper ions optimally available to the plants. Under consideration were CuO nanoparticles and two copper nanosheets: Cu3(PO4)2 and CuO. Experimentally, the nanosheets kept better contact with leaves than the irregularly-shaped nanoparticles did. Both nanosheets released copper well, but the Cu3(PO4)2 sheets released copper in a burst: 60 times faster, in water, than the other nanomaterials, with even faster bursts in media more like plant-cell environments. Hudson's modeling work, which takes into account the effect of ion accumulation in solution from surface dissolution, explains the dramatic bursts by demonstrating how the configuration of the Cu3(PO4)2 lattice is relatively thermodynamically favorable to copper release. Aiding him were the calculations of the group's postdoc, Dr. Ali Abbaspour Tamijani, which allowed investigation of the various media's effects.  Experimentally, the gradual-release CuO nanosheets gave the highest root Cu concentration, yielding the best disease defense in plants, and underscoring the Connecticut researchers' contention that nanomaterials can be tuned rationally to provide optimal plant nutrition. You can read the entire paper here https://www.nature.com/nnano/volumes/15/issues/12.