Proton-transfer reactions are fundamental in chemistry and have important applications in enzyme catalysis and energy transduction and storage. We teach acid-base reactions to beginning chemistry students as if these reactions are simple and straightforward proton-exchange processes, but they are not. Proton-transfer reactions can involve quantum tunneling of the proton, solvent control of the reaction coordinate, and strong anharmonic couplings of the proton to many degrees of freedom of the complex. As a result, these reactions pose a significant challenge to even the most sophisticated quantum rate theories. Researchers have developed a number of theoretical methods and applied these to the same model system, but these models show little agreement about the chemical reaction dynamics. Although experiments have probed proton-transfer reactions in excited electronic states, such systems remain theoretically inaccessible. We are developing a model system for studying proton-transfer reaction dynamics in the ground electronic state using 2D IR spectroscopy and want to use that system to test theoretical predictions about the factors that control the reaction dynamics. This project is in its preliminary stages. More information to come as we continue to make progress on this interesting and important problem! 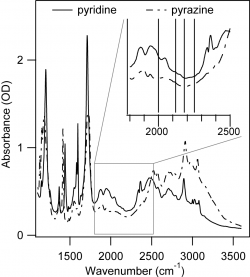