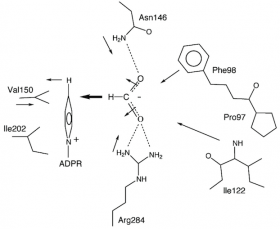 Formate dehydrogenase (FDH) is an NAD+-dependent enzyme that catalyzes the oxidation of formate anion to carbon dioxide. It is an ideal system in which to study the functional roles of femtosecond to picosecond enzyme dynamics in the enzyme-catalyzed hydride transfer reaction because the azide anion, which is an excellent spectroscopic chromophore, is also a transition-state-analog inhibitor for FDH by virtue of the fact that it is isoelectronic with the CO2 product of the reaction but negatively charged like the formate reactant. We have previously studied the commercially availabale enzyme from Candida Boidinii and observed significant differences between the binary and ternary complexes with azide. Unfortunately, this enzyme does not crystallize readily and comes as a mixture of isozymes, whcih complicates the interpretation of our results. Our recent efforts focus on the enzyme from Pseudomonas Sp. 101, which we express from E. Coli. This enzyme crystallizes readily in the ternary complex and is a straightforward target for mutagensesis.

This project is part of an ongoing collaboration between our group and that of Amnon Kohen, who is an expert in measuring kinetic isotope effects (KIEs) for enzyme-catalyzed hydrogen transfer reactions. Our goal in this project is to study both the active-site dynamics and the KIEs for a series of active site mutants in which we serially mutate a hydrophobic residue in the active site such as the valine or isoleucine located immediately behind the nicotinamide ring to make it seqeuntially smaller. In other enzymes, such serial mutations have caused the isotope effect, which is typically temperature independent for the wild-type enzyme, to become increasingly temperature dependent. Our hypothesis is that we will observe changes in the active-site dynamics that correlate with the changes we observe in the temperature dependence of the KIEs. We have had several joint students work on different aspects of this project. The students learn to do the enzymology, the KIEs, and the spectroscopy giving them a unique and broad skill set. 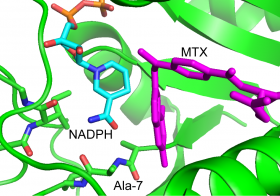 Dihydrofolate Reductase (DHFR) catalyzes the hydride transfer reaction between nicotinamide adenine dinucleotide phosphate (NADPH) and 7,8 dihydrofolate (DHF) to produce 5,6,7,8-tetrahydrofolate and NADP+, a reaction that is of great importance in the production of thymine in cells and therefore a convenient target of drugs that work by inhibiting DNA biosynthesis.  Primary kinetic isotope effect (KIE) measurements done in the Kohen lab on the hydride transfer catalyzed by the Escherichia coli wild type enzyme show no temperature dependence, however mutations performed on the active site residue isoleucine-14 (I14) to make it systematically smaller (to valine, alanine, and glycine) directly correlate to increasing temperature dependence on this KIE. I14 happens to sit in an important place in the active site, as it is placed directly behind the nicotinamide ring of NADPH and is believed to push the nicotinamide ring to an optimized distance with respect to the C-6 of DHF such that the hydride can efficiently tunnel from NADPH to DHF.  The fact that the wild type enzyme shows a temperature independent KIE and that this becomes temperature dependent when I14 is perturbed to systematically smaller residues suggests that this residue modulates the distance between the donor and the acceptor of the hydride being transferred and that this distance is highly optimized in the wild type enzyme such that motions in the active site along this trajectory are essentially rigid on the timescale of the hydride transfer itself (believed to be on the order of hundreds of femtoseconds(fs) to several picoseconds(ps).)

While it is convenient to picture things happening this way qualitatively, KIE data alone can not quantify or confirm rigidity in DHFR, and while the technology exists to measure events at this time scale using 2D IR spectroscopy, the infrared spectra of proteins larger than several amino acids is not straightforward as no one residue in the protein has a unique absorbance that can be deconvoluted from the highly congested IR spectrum of a modestly sized protein in water.  Therefore, we are making efforts to specifically label ligands and active site residues of DHFR with unique infrared chromophores that absorb IR in regions not overwhelmed by water or the protein (azide, thiocyanate, etc.)  This will allow us to spectroscopically probe functionally relevant complexes of DHFR with substrate and transition state analogs of the reactive complex in order to gain a better understanding of how motions in DHFR on the timescales of interest may influence catalysis. 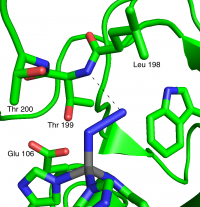 Carbonic anhydrase catalyzes the interconversion of carbon dioxide and hydrogen carbonate anion and is critical for regulating pH in blood and tissues. It was among the first systems whose dynamics were studied using nonlinear vibrational spectroscopies by Robin Hochstrasser in the 1990's.1 We have focused on human and bovine carbonic anhydrase II (hCAII and bCAII). Earlier work in the Hochstrasser group had suggested that certain active site residues were responsible for the observed dynamics. We set out to test this hypothesis by studying a series of active-site mutants in which the residues suspected of playing an important role in determining the dynamic time scales observed in the experiments were mutated to see if the oberved dynamics changed as a result.  Our initial studies using photon echo spectroscopy showed that the side chain of threonine 199 does not interact with the azide inthe active site as had been previously suggested.